Are We Looking at Our Next Captain?

Share All sharing options for: Are We Looking at Our Next Captain? 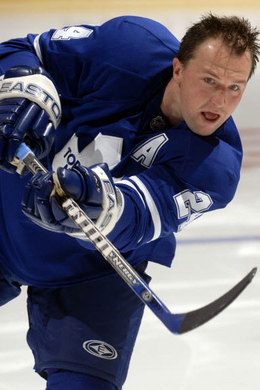 Peeling away the buzzing fan-submitted content sites who salivate over All Things Toronto, some actual news outlets are beginning to report with some consistency over the past 24 hours on the possiblity of Florida entering into a trade involving 33-year old veteran Leafs defenseman Bryan McCabe. No mention yet regarding other names to be included.

FANBOY OPINION ALERT: I do believe this will get done, but as the Star article stated, not before September 1st due to the signing-bonus payout. It will most definitely not involve Bouwmeester. Almost certainly, look to JM sending a small package the other way. Names to consider: Skrastins, Van Ryn (especially), Peltonen, Cory Murphy.
McCabe and the Leafs would do well to part ways. Last year proved difficult in almost every way for the Buds, and the love-hate relationship with McCabe only worsened after an early-season on-ice gaffe: 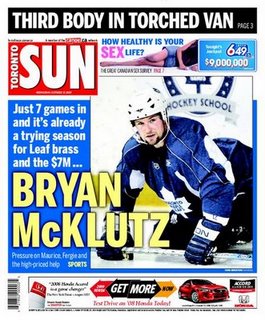 (Not to worry, kids...he recovered the next night with a multiple point performance against, um, Florida. The bodies in the torched van, however, have yet to record a similar performance.)

The proverbial fresh start could be exactly what the former second-round pick needs. His leadership skills have never been openly questioned (coming off of Captain Olli, I believe that's a fair statement), he possesses good size (6-2, 220), and is considered one of the finer offensive "puck-moving defensemen" that are all the rage in the league right now. Behind his own blueline he's a bit unremarkable (though a career +37...nice) but boasts a booming shot on the power play. A fine addition when considering the potential loss of J-Bo.