Share All sharing options for: Crisis in Toronto: McCabe...UPDATED 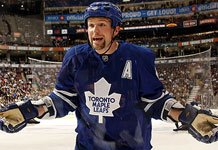 TSN is reporting the following:

All the pieces of the transaction have reportedly been agreed upon - sources say the Panthers and Leafs have settled on the players involved and McCabe has indicated he will waive his no-movement clause to go to Florida - and the only reason to delay the transaction is to allow Toronto, not the Panthers, to be on the hook for the signing bonus.


Leaf sources say there is likely to be another Leaf player going to Florida as part of the package and Toronto is expected to get at least one player back from the Panthers, but Panther defenceman Jay Bouwmeester, the subject of much trade speculation in south Florida, is definitely not involved in any way.
Wow. Another player coming over from TO? Maybe it's Kilger again. What are we giving up? Gonna be a wild few weeks of pointless speculation, but that's what we do.