With a sterling year of service in Sunrise (and a year of dressing-room fuming, to boot) under his pads, Tomas Vokoun returns as the starting netminder for 2008-09. Chances are he'll take a few more games off due to the emergence of Craig Anderson as one of the best backups in the league, and a much improved defense to protect the tandem. He'll need that time off if the postseason is within sight. 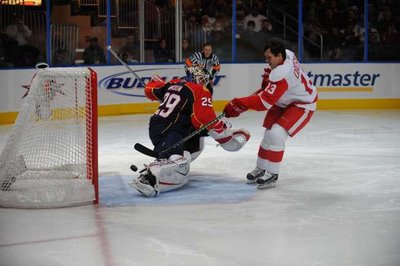 Tomas does his best against some lucky call-up from the AHL in Red Wings guise. How good can he be...he lost his helmet! 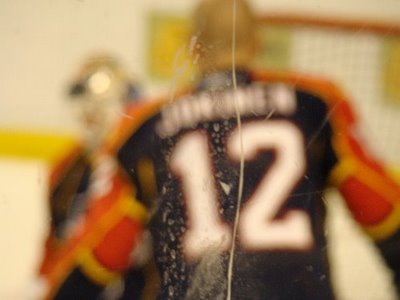 Though the ghost of Jokinen is never far, Vokoun is the unquestioned leader of this scrappy band of Cats. Doesn't this photo resemble something out of The Omen?

If ever there was a case to be made for a non-skater being team captain, Vokoun has to be on the short list. His outspoken style and ability to fire up the fans with his remarks and pure passion for winning made him a favorite throughout South Florida. Before his arrival, very little criticism ever came out of the locker room. Most refreshing.