Sandman Needs a Mask? Toss a Harpoon and the Solution Presents Itself

Share All sharing options for: Sandman Needs a Mask? Toss a Harpoon and the Solution Presents Itself 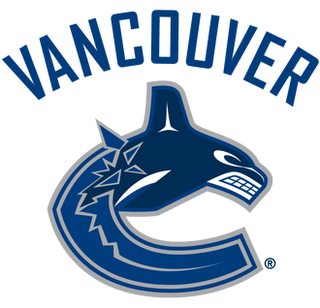 The Vancouver Canucks, thanks to their all-seeing corporate overlords, decided in 1996 to incorporate a killer whale design into their logo. 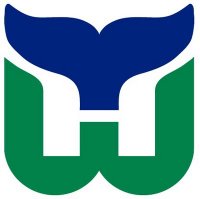 To answer the obvious question, the Hartford Whalers had no objection to this. Links are almost impossible to find after all this time, but if it means anything, I distinctly recall reading the Hartford Courant in late summer of that year - which I did religiously each and every morning since the internet was not yet what Al Gore had blissfully anticipated (But Love Story was a big hit 20 years earlier in Budapest and some of Myanmar...oh eff it. It'll always be Burma to me). But I digress.

In a sidebar-style NHL "quickie" that day, it was reported that the 'Nucks asked Karmanos and Rutherford for their blessing on the new logo, and while firmly entrenching the Vancouver franchise firmly into cephalopod-and-harpoon territory, they received it.

Forgetting that Karmanos and Rutherford had all but wrapped up hockey in Connecticut's capital city some seven months before it went public is irrelevant. The Whale was dead in New England. Long live Pucky.

Flash forward to 2007. Vancouver signs goaltender Curtis Sanford. A mediocre year, team-wise, later, Curtis needs a new lid, and wants you to design it. Go ahead...write a script for the guy.

After way to much time spent considering the potential impact of this post (read: not so much) I'll get to my point and appeal to Curtis to simply wrap it up. The reason? Here ya go: 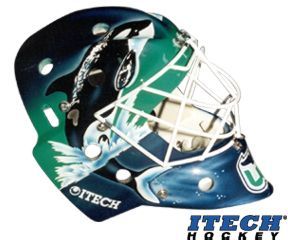 Golly. That there design looks a lot like a killer whale, according to the infallible all-encompassing online resource known as Wikipedia. In fact, the colors of this classic retro mask match what the 'Nucks are pimping this week (and yes, the sweaters still have that city name emblazoned. Say, what city was that again? Began with a "V"? Hint: the final straw in showing Trevor Linden the advantage in staying home and catching Blue Harvest. Hey...disambiguation, luzers).

Killing me trying to find a clear, close-up Sean Burke mask photo from those last days of the Whale. I'll continue the search. Otherwise, rev up the PhotoShops.

All jonesin' aside, I applaud Sanford and the Vancouver Canucks fo their creativity and forward-think. But a whale's a whale.