A Sea of Lonely Seats...What to Do?

Share All sharing options for: A Sea of Lonely Seats...What to Do? 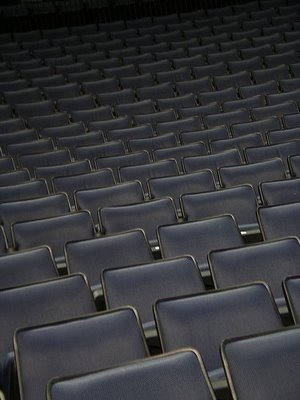 In Monday's edition of Puck Daddy's fantastic "5 Ways I'd Change the NHL" series, the incomparable James Mirtle made his long-awaited appearance.

(Off-topic: What in the name of Hades did we do last summer without Puck Daddy? Oh yeah...the Janis Sprukts Watch began. Hearty stuff.)

There's been much talk of contraction/relocation during this series, and frankly I'm bored with it. It's been covered here recently and I'd prefer to give it another week until dragging that angry monkey out of the closet yet again. (Cue the obligatory Angry Monkey...like there was any question I wouldn't do it.)

Dr. Mirtle, in his number one suggestion, makes a terrific point about, quite simply, empty seats and the associated negative perception they carry in some of the under-performing markets. Duhhh, Florida is named, along with Long Island and Phoenix (their new center should feel right at home).
The Feline Faithful will automatically recoil into a sense of familiar dread; "Here we go...bashing hockey in South Florida again, lousy crowds, no playoffs, Luongo, Jokinen, ice should be in the frozen drinks, there's hockey in Florida?, Mike Keenan, nobody cares, Gators/'Noles/Hurricanes, the uniform sucks, the logo sucks, the building sucks, Peter Taticek, the concessions are too pricey, local papers don't give a damn, local TV gives less of a damn, FSN is dropping games this year cuz no one watches, there's hockey in Florida?, this icing sponsored by Hanes Pantyhose, this puck-over-boards-stoppage-in-play sponsored by The Cheetah Club, Denis Shvidki, there's hockey in Florida?, etc." Face it, this is a learned behavior, developed over many years of losing seasons and incessant, unending brutality about our Small-Market Status by the hands of the privileged (read: Leaf "fans"). A truly unique master's thesis awaits the right psych student.
Relax, Illustrious Twelve...no reason to panic this time. Mirtle only wants to see clubs with "wide swaths of empty seats" get proactive on filling them. I completely agree, and have had similar thoughts for quite a while (having been a Whalers slave...'nuff said). All those unused chairs at the 19,250-seat BAC either contribute to or assist in creating a local and national perception problem for the organization, and the league.
Run a quick video panning from ice level to rafters, on a Tuesday in November vs. Atlanta and there's not much question as to why Sunrise is labeled a black hole. They've been a slightly-above-.500 team on the ice with a playoffless recent history. Who would expect better than a 15,436 average for the season, which is actually up from the previous year? Why would Joe South Florida Sportsfan go out of his way? Same goes for the aforementioned Coyotes and Isles.
Wanna fix the empty seat problem? Wins. Lots of 'em.
Victories on the scoresheet will bring victories at the box office. That is a guarantee even in this fickle market that only days ago was deemed the worst in all of American sport.
The only potential drawback is free or reduced-price tickets seriously undervaluing the season seat holder. A problem, indeed. But that's a war for another day.
Personally, I'm not so concerned about empty seats. And please Yormark, no drapes. As long as management is doing their job in placing a winning - or even competitive - squad on the ice, the issue will resolve itself.