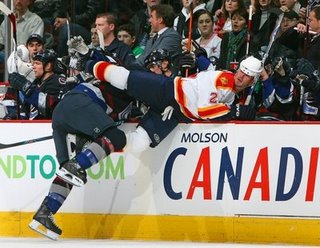 Considering Toronto is the speculated trading partner, and any significant hockey news is weeks away, it should come as no surprise that the National Post is digging up whatever dirt they can find on the mysterious Mike Van Ryn, that crazy defenseman who actually wants to remain a Florida Panther.


"I haven't heard anything so I still consider myself a Florida Panther," Van Ryn told the Miami Herald. "(Toronto) would be home, I guess, but my home is here (in Florida). It would be quite an adjustment. But whatever happens, happens. If the Panthers want to move me, they will. But I like it here. I'm just going about my business."

There's no one in hockey who would ever say a negative thing about the guy. He's been wonderful through his injury issues, helping the team on the community outreach front, big-time. Can't think of anyone outside of Jokinen who stepped up to the PR plate better than he (and MVR finished his charity golf appearances). I'm not aware of Bryan McCabe's record in the community, and I'm assuming it's sterling, BTW, but he's going to have some rather large skates to fill.


Editor's note: I have attempted - several times - to include a photo of Van Ryn for those few who need illustrated menus at McDonald's. No luck. I blame it on our favorite tropical storm, which should be within a hundred or so miles of here at the moment.
Editor's second note: Mission accomplished.