Those "Captain" Kirk McLean Jokes are now a bit Hollow

Share All sharing options for: Those "Captain" Kirk McLean Jokes are now a bit Hollow 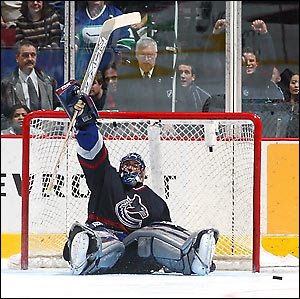 After Canucks coach Alain Vigneault polls his players, it's clear, with a firmly raised arm, only one modest man has the captaincy firmly in mind. No secret ballots in Vancouver!

The Canucks, in their quest to outdo Tampa Bay in the headlines, have named former Panther Roberto Luongo as captain for the upcoming season.

I tried in vain to get my six year-old copy of MS Paint to muster up one more batch of magic, by firmly affixing an elementary school-grade "C" on the big guy's chest, ya know, like the WWL does after a baseball trade by placing Traded Dude's face under the hat of his new team, even though he's never been near his new city, but sadly, to no avail. Evidently I shared Hartford County with ESPN, and little else.

I have no particular problem with this. Heck, I've been president of the "Vokoun for Emperor" PAC for the past 10 months, or at least since his first locker room bout of "Let's play Vieques Island!" following a steamy, unsupported loss.

I'm a little disheartened that if they were going to nominate former Cats, Lukas Krajicek does not appear to have been in the running. Perhaps next year.

Greg at Puck Daddy has a pretty keen take on what must have been the issue with the existing two front-runners for the position:

"Maybe they could have given Henrik and Daniel Sedin one half of the 'C' each, so it looks like one of them is wearing an eyebrow and the other is wearing a ski slope. Or maybe not."

As Mirtle points out, the fun will be in seeing how the team skirts the inherent league rules on the subject of a goaltender captaincy.

If nothing else at this point in time for Panther fans, there is now at least one person with a legal South Florida residence who is captain of an NHL club.