A fresh new season of South Florida hockey, Jacques Martin-style, approaches! In this series, TLB will be posting links to the best, worst, and indifferent previews of our favorite felines: the 2008-09 Florida Panthers. 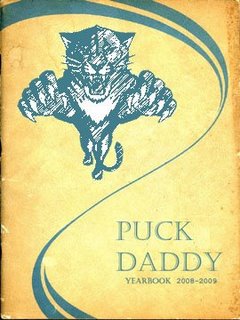 Here's the big one. Greg weighs in on our beloved felines:

"Teacher of the Year: We didn't mention him above, but if there's one key new addition, it's DeBoer. Because he's going to have to figure out how to take a team that was 20th in the NHL in scoring, and that traded its best offensive player for two defenseman, and win games at a professional level on which he's never coach nor played. Yippee!"

There really can't be much of an argument against any of the season previews we've yet seen (at least the non-open sourced variety). This club is, as currently constructed, so tough to read that anything other than a bloody dissection of it's many new parts is lying to yourself. There is simply no easy prediction. We're not talking the Wings, here.

Anyway, the irrascible Puck Daddy injects humor, stats, and good-natured ribs, leaving us with a fine preview, NOT a prediction. Strut on over, and catch the rest of his team-by-team yearbook entries. Must-read if you haven't visited before.

And he's got a good eye for Panther-related blogs, too...