Custance on The Deal, and Fan Reactions Gone Horribly Wrong

Share All sharing options for: Custance on The Deal, and Fan Reactions Gone Horribly Wrong 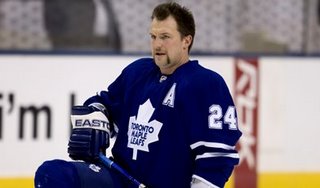 A POSITIVE NOTE Craig Custance of The Sporting News has a surprisingly upbeat - given the molotov cocktails recently tossed - take on the trade that brings former All Star defenseman Bryan McCabe to Florida.

"The trade gives the Panthers a defenseman who can move the puck to the club's young forwards. Factor in the draft-week deal with the Phoenix Coyotes for defensemen Keith Ballard and Nick Boynton to go with franchise defenseman Jay Bouwmeester, and (GM Jacques) Martin has the Southeast Division's strongest blue line and one of the league's deepest."

A breath of fresh air, and an opinion that Cat fans will warm to.

CONSPIRATORIAL OMISSION? As of 10:15 pm, The Panthers official site has not updated the roster to include McCabe. Mike Van Ryn is however off the list. Number 24 remains available.


And no, I do not see this as anything more than a website update not yet completed. The deal's done.

YOU WANT WHAT IN THERE??? A talkback from obviously HUGE McCabe fan FU8AR on the SportsNet website speaks for itself:


Speechless. Was that his mother? And yes, he/she ultimately gets worked by his own brethren.
Considering the drivel shown below which the Leafs willingly partook in, I imagine "surprise" is not an emotion I should revel in when thinking of the educated Toronto fanbase: