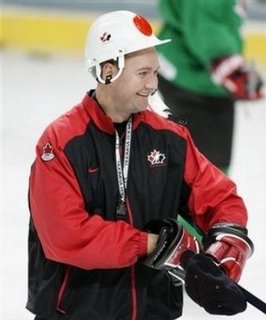 "No, this hat ain't for falling expectations..."

New Cat coach Peter DeBoer is ready to get to work, as profiled by an AP story in The Sporting News (and I'd swear I read most of it days ago in one of the Big 3 locals):


"He's also in a city (Miami) where he's already looking forward to wearing shorts to the practice rink in January."

Miami again. Hey...fantastic idea for a new poll! I'm on it. Finally on P-Deb (do I supremely suck or what?), he's been contrasted with Washington first-year phenom Bruce Boudreau in many circles. I'm trying to work up a crafty Slap Shot 2 reference but find I'm creatively bankrupt at the moment.

Hockey Canada gives it's blessing to coach Benoit Groulx and his ascension to Rochester, according to the Ottawa Sun:

"We have a lot of depth in the coaching ranks. I understand his desire to get to the next level. That's the way Hockey Canada should be."

Nice, thoughtful explanation. Kinda flies in the face of their naming this guy as Groulx's replacement, however. 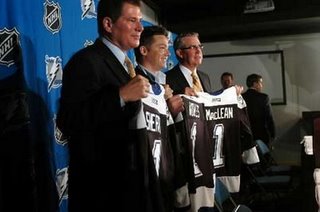 "Not so fast with that sweater, Dougie!"


Former Panthers coach (the last one of the morning, I assure you) Doug MacLean is gonna gab season-long on HockeyCentral, a show on Sportsnet. For our many puckhead friends in Phoenix, Sportsnet is a sports-related cable television channel in Canada that headlines with hockey. Read that last part again. It's the anti-ESPN.