Share All sharing options for: Game Day! Cats at Flames 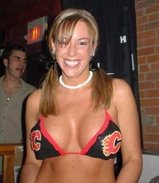 The exhibition season begins in several hours and the excitement is palpable. I still can't believe we've reached the tail end of summer. And a long one as always.

Florida (well, half of them) takes on Iron Mike's scrappy bunch at the Saddledome tonight, 9:00 pm. Check it out on radio with the Cats' local broadcaster:

Oh wait. That's right. They're not carrying it. The Marlins are battling for...nothing, so catch all the, um, baseball, at "The Ticket."

For those who want a little action and life in their sports, travel the supine byways of the internet, heading north to Calgary.

Defenseman Colby Robak was reassigned to Brandon of the WHL. He's apparently got some fans there, too.

GR reports from the Red Mile on all things Cat.

"On Tuesday night, the Panthers kick off an ambitious Canadian preseason schedule, with Florida playing six exhibition games in six nights. Florida visits Calgary, Alberta, on Tuesday, then goes north for two games in Edmonton, Alberta, on Wednesday and Thursday."

"'I'm going to do everything to make the team,' Frolik said."

Don't forget Michal Repik...the same Repik who completely obliterated goaltender Chris Beckford-Tseu on Saturday. The future's bright...if we can hold on to our assets. Bravo JM for not giving in to knee-jerk deals at the deadline.