Share All sharing options for: Game Night from Calgary 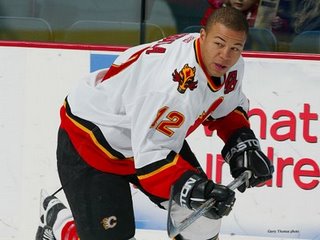 Jerome Iginla will be joining new teammate Todd Bertuzzi tonight in exhibition match number one between the Panthers and Flames.
Not to be upstaged by Iron Mike, Cats coach Pete DeBoer lines up a semi-familiar forward combo of David Booth, Stephen Weiss and...Michael Frolik? Based on the flashes of ability I saw from the kid on Saturday, this could be a trio that sticks.
In fact, Calgary radio Fan960 is talking up that line right now. Sounds electric. In fact Weiss and afterward JM the GM will be appearing in the next few moments. Awesome.
Our local boys have been checking in regularly, so let's get to Calgary without delay.
In a fascinating scientific experiment, the Sentinel's Steve Gorten morphs into Jay Bouwmeester in order to sort out the young defenseman's thoughts on the present...and the future.
"Anyhow, I tried to put myself in Bouwmeester's shoes to understand what this contract situation is like for him. I figured since I'm in his shoes, I might also hop inside his head. So hear's what his inner thoughts might sound like..."
Definitely read on. And for an update from earlier in the day, Gorten gives us a few nuggets of info to hold us over.
A little line talk from On Frozen Pond highlights George Richards' morning post.
"Richard Zednik, originally slated to play tonight, was not at skate."
Wouldn't read too much into that one.
Fan960 is interviewing Mike Keenan now. Talking Bertuzzi. "Focused individual". There's a real scoop.