Reg Retires to the Palm Isle

Share All sharing options for: Reg Retires to the Palm Isle 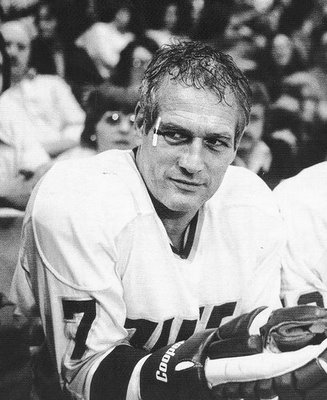 I just learned of this a moment ago. Two disciplines have lost an icon: Hollywood, and (though he never meant it) hockey. Paul Newman has passed.
Not entirely a surprise, but nevertheless a shock to all of us who grew up as fans of the Chiefs.
Nothing here to say that is new. There's little that's pretty about Slap Shot. It is hysterically funny, offensive, riotous, edgy, timeless (despite the wardrobe), engrossing, and about a dozen other wonderful things.
As a community, we know all the dialog. The sets and locations. We know why the dog statue sits elevated in the park. We learned the word "bounty" long before it was necessary. We found out what hockey wives do - at least in Charlestown - when the boys are away. We know Ned Braden is a college graduate. We know what "is icing". That Jim Carr wears a rag. That Dickey Dunn's children have foul mouths. That Anita is garbage for letting the team go down the drain. That Lilly is a decent item. That the Bradens' van has a suspension installed by God Himself. That there are a lot of shyksters in Florida. And on and on and on...
My own memories of Slap Shot and the legend of player-coach Reggie Dunlop' efforts to turn around a floundering franchise began in the early eightees, when VCRs began their rule.
Along with usual fare featuring Star Wars, Trek, and a few others ("Alligator", anyone?), Newman's Slap Shot was on constant rental watch. My brother and I may have been Whalers nuts in heart and soul, but if we had to pick a second allegiance, it would have been fictional Charlestown.
I can honestly say not a day goes by where I don't reference Slap Shot in at least one way, shape or form. Paul Newman's portrayal - in a movie chock full of realistic, gritty portrayals - was as strong as any he'd ever performed, and that's quite a list.
We always knew we lucky to have been recipients of the finest sports movie yet made (argue me on that one), and now time has claimed the coach. The coach we entrusted, the coach who babysat us at the tv. The coach we've all quoted a thousand times. And will quote a thousand more.
Bless you, Paul, for so. many. hours. of entertainment - and growing the game we all love.
For testimonies and an overall love-fest from our friends across the 'net regarding Newman and his impact on well, us, see the links list on the right side of this page. Good reading.