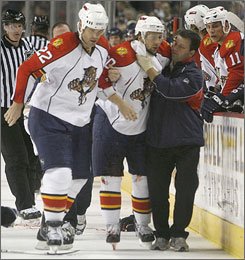 No matter what your team affiliation may be, not a hockey fan in the world - heck, any fan - will soon forget the night of February 10th, 2008. There's no need to replay the events of that macabre evening in Buffalo, the same city where almost two decades earlier Clint Malarchuk suffered an eerily similar injury as that of Richard Zednik. As SuperFans, we know the details.

Lost in the shuffle of that terrible image above - and I've resisted posting the truly gory ones; we've all seen them time and again - Panthers trainer Dave Zenobi performed a true act of heroism - just "doing his job" - in a phenomenally difficult situation. 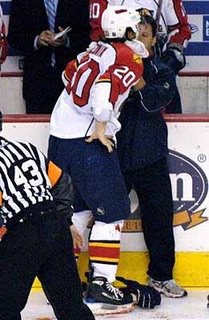 Not much more can be said. The guy saved the life of a fellow human being, and we all watched, mesmerized, jaws on the floor, as the drama unfolded. Would Zeds live? It didn't look as if he would. Really. Live television is rarely if ever so involving on the part of the viewer. Surreal with a capital "S".

Forget whether or not the league made the right call in continuing the game, while shoveling blood-stained ice to the side-boards. Anyone who watched, either on TV or in that solemn arena in northern New York, cared not about the final score (and ultimately, it didn't affect either teams' post-season hopes). The Cats lost, but so what.

The folks behind the scenes, such as Zenobi, never get their due until something catastrophic is handed to them on a platter by the sometimes cruel hand of destiny. And destiny couldn't have found a more capable pair of hands.

The entire hockey universe looks forward to the return of Richard Zednik. Cameras and tape recorders will be in full force at every away game for a sound bite from the man who cheated death in front of thousands. But hopefully Zenobi gets his props. The league honoring him was the least that could be done. If I could find more photos of the man I'd post them.

We are honored and blessed to have him - and all the others around the league like him - not only within the Panthers organization, but as a part of our community.