Share All sharing options for: Remember Your Panthers VII: Rusty 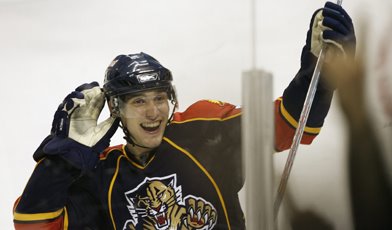 Still the best Panthers picture - by far - from last season, Rusty shows some real character and excitement...something sorely lacking on the club since...since...

Rostislav Olesz returns to the Cats with a freshly-signed six-year contract (sense a pattern here?), prepped to continue his progression to becoming a consistent second-line scoring forward.
The 7th overall pick in 2004 has tremendous speed and a tricky-to-predict-but-laser-like-shot, yet is still trying to shake the dreaded "injury-prone" status that had many observers giving up on him as a softie. For several years. His 56 games-played last season is testament to that, but perhaps a change in philosophy and approach is the key to more healthy time on the ice. A regime change at the coaching level should allow for a more positive outcome.
His 14 goals (56 games) in 2007-08 is a career best, eclipsing the 11 he had the year previous...in 75 contests. An obvious leap forward. A better-than-10% shot percentage is an eye-opener.
Two-way skills lend to his resume an invaluable quotient, as he spends considerable time killing penalties, and this club has faced A LOT of penalties. Interesting it will be to watch what change in direction, if any, coach DeBoer decides to employ with this young, energetic, and under-the-radar talent.

Any good administrator (er, center?) has a Lobot (left wing Olesz) to get the dirty work done. Who will be this year's Lando? Weiss? Um, ah, Weiss? BTW: Empire Leia was the tops. 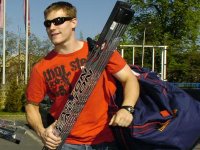 "Mr. Cohen GIVES me sticks? Geez...thanks for telling me NOW. JetBlue charged $35 to check these..." 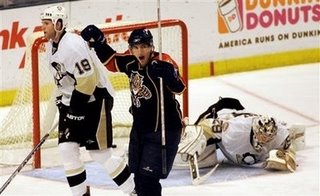 Yeah, I phoned that last one in... You want me to dust off the Howard Dean rant? Again?