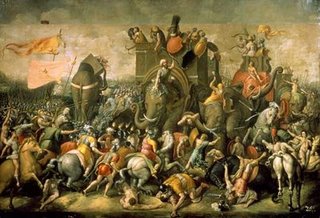 The brave and gallant Martin-Youth of Sunrise is defeated at the hands of the mighty-but-untested youngling Senators of Kanata, during today's Battle of Kitchener. Note the inaccuracy of the portrayal above: history shall record there were actually only two elephants present on the ice this day.

Yes, the Panthers - in rookie guise - fell to Ottawa's kids 4-2 in the opener of the 2008 Rookie Tournament, featuring the Sens, Leafs, and Penguins up-and-comers.


Given that the only info I could locate on the game came from the Sens' website, there isn't much to report. Even the local paper up there had nothing so far.


In a nutshell, here are the Cats' stats: someone scored a goal, someone else (maybe the same dude!) scored another goal, someone or several someones allowed a combined four goals, or at least three with a possible empty-netter.

It's entirely within the realm of thought that coach Benoit Groulx spoke with the media (cue crickets) and a 99.9% can't-miss wager demands that a player from the team said later: "We've got to play 60 minutes."


There you have it from Kitchener, Ontario, folks. Stick a fork in it.


Shawn Matthias (who?) scored one of the Florida goals.