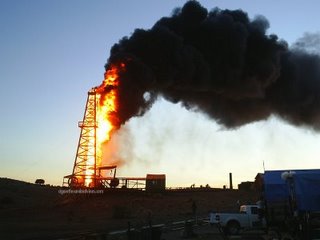 First off, I've got to admit that I missed the first, second, and 15 minutes of the third period last night. Not to worry, I was having a grand evening. Upon arriving home and locating - with a bit of difficulty - the appropriate sports radio station in Edmonton (excellent broadcast but they may want to consider hyping the game a bit on the website), I discovered the Panthers and Oilers to be locked in a 2-all battle.
After last night's victory in Calgary, I half expected reality to come crashing down, the Cats sinking into the Third Period Psychosis which has plagued them for so long. It'll happen; they'll settle back, get defense, on their heels, take a bad penalty, and play scared...somehow knowing the shoe is going to drop. Ask any Florida fan about it. It lives. It breathes. It should have it's own sweater with a number on it - probably 666. But...
...they didn't lay back. Their heels never dug in. The wafting ghosts of JM the Coach and Olli the Captain never appeared. There was a certain...confidence? Yeah, I guess that's what it's called.
C'mon...it'll happen in the OT. Nope.
Five minutes later, we're on to the shootout. Ok...here's where we excel: dropping it in the SO. How many points has this squad surrendered in the shootout over three years? Countless. Somehow, they stayed cool. You could feel the calm, the steadiness. Coach DeBoer had his troops mentally prepped. For the first time in a decade, one got the impression that the Cats wouldn't be rattled.
Goals by Nathan Horton, Cory Stillman, and Bryan Freaking McCabe(!) put the Cats over the top against a more or less split squad of Oilers in the shootout. Florida rookie goaltender Chris Beckford-Tseu (referred to consistently by Oiler broadcasters as "BeckMAN-Tseu") absolutely shined in the fight-dominated 3-2 win (Tanner Glass is gonna feel this one for awhile).
Preseason, yes. But nice nonetheless.
It's a rematch tonight, as the Panthers set up for exhibition game three.
And on to the newsies:
NHL.com's News, Notes, and Numbers from the night.
TSN reproduces a Canadian Press summary of the game.
The Miami Herald's George Richards saw a bit more of the game than I did.
"Chris Beckford-Tseu started in net for the Panthers in their preseason game at Edmonton, surrendering two goals in regulation but saving his best in the end. Beckford-Tseu gave up two goals in the shootout, but stopped Edmonton on its final three shots for the winner."
The Sun-Sentinel's Steve Gorten gives his view of the action.
"The Panthers had two power plays in overtime, but came up empty and are now 0-for-14 on power plays in two preseason games." Scary, but not disastrous yet.
The Palm Beach Post has this.
More to come later today, kids, as we prep for another night of Alberta action.