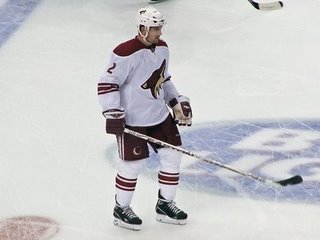 JM the GM continues to solidify his formidable defensive corps by signing newly-acquired d-man Keith Ballard to a six(!) year contract extension.
These loooong-term deals are becoming the norm, and given the restriction of movement and control they give to clubs, one can see why they are preferable. Of course, the player doesn't mind the job security it affords.
Kinda sucks that the guy can float through until the final year if he so chooses, but any good management staff will have - hopefully - vetted out the type of personality who might be likely to display a lack of character down the road. Hopefully.
In any case, bravo again to Jacques Martin. Another large piece of the future locked in.