Wednesday Primer: A Win at the 'Dome

Share All sharing options for: Wednesday Primer: A Win at the 'Dome 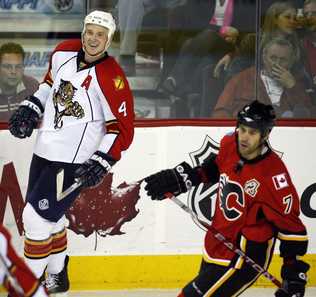 Lots to get to following last night's 3-2 comeback win over Calgary, so off we go.

Peter DeBoer is relishing his first - granted, meaningless - victory. Correction, "meaningless" is far from fair. As George Richards describes, it was meaningful for many reasons, foremost the club's ability to win, on the road, in the third period. But mostly to win. Mostly.

''For a guy used to riding buses for the last 12 years, I enjoyed the charter,'' said DeBoer.

"All (Boyd) did was draw two penalties in the night's opening 23 minutes . . . then pot a soft-handed beauty . . . then set up a power-play strike by Jarome Iginla."

If Jay Bouwmeester was looking for a perfect way to put himself on the front pages of Alberta newspapers, in addition to stoking the contract fires - he found it with his game-winner.

Also from the Herald (um...the Calgary Herald), a proper game summary, which is exactly what one would expect from a "traditional" hockey market. I guess that means north of Martin County.

"Craig Anderson won't want to see many shots like the Jamie Lundmark slapper that smacked the Florida netminder on the mask and left him momentarily dazed."

We haven't even seen Stillman, Horton, McCabe, Ballard, et al. On to Edmonton; more on that to come!