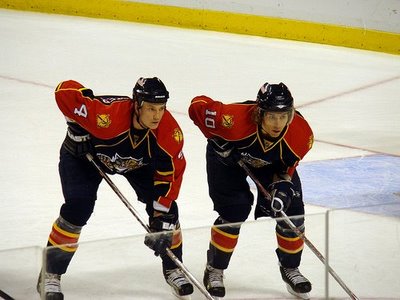 Through the first two games of the season, consider the following:
David Booth: 3G, 1A, 4P, +4, 1GW, 10SH (30%), 18.95 Avg TOI
Jay Bouwmeester: 1A, 1P, +1, 2PIM, 6SH, 32.6 Avg TOI (Over 34 last night alone...serious stuff)
The Dude is getting mondo opportunities, impressing the bejesus out of anyone who cares to pay attention. He's got a knack for positioning which is becoming his trademark. His speed and vision are phenomenal right now.
J-Bo's got a single point, but he's more than likely to lead the league - again - in ice time. The intangibles he brings each night are more and more pronounced. The points will undoubtedly come as the team gels. He's a fourth forward, as I stated last night. It's the only honest assessment so far.