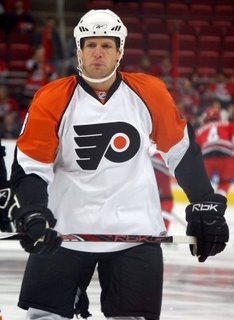 
Some of you may remember Fitzpatrick from such films as "Fourth Defensive Pairing Not Enough" and "Cap'n Louie's Vancouver Wall of Silence". 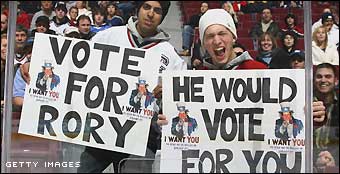 Others might recall the "Vote for Rory" campaign of two years ago, wherein a guy in Buffalo with a lot of extra time on his hands nominated Rory, via write-in campaign, to the Western Conference All Star team. You know, the glory of having a ham-and-egger next to Nick Lidstrom and all. Google it. This happened.


Time forbids me from going in-depth on this, but long story short, he almost made it, before the league pulled a "Kennedy 1960" Chicago-style Daley end-around. I voted for him too (Fitzy, not Kennedy), so to all of you "sanctity of the game" types, screw off. It was fun, and good for him, a guy who played the whole debacle very cool. Can't we fathom just ONE All Star "spectacular" that doesn't feature Prongs, Nieds, etc. starting the game? Let's change it up a bit, folks...for the fans.


But I digress. Fitzy's got a good gig here, with a club he has a history with. Congrats, Rory.