Share All sharing options for: Anderson Smacks Senators, Other Notes 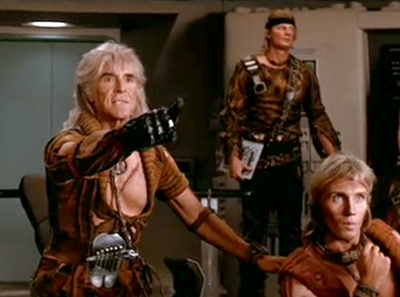 Florida Panthers' goaltender Craig Anderson (41 saves), left, reveals a defensive lapse before him; explains his concern to fellow Cat Karlis Skrastins (+3) in a photo from Wednesday's game in Ottawa. Asked prior to the game what his thoughts are on Sens' forward Dany Heatley, Anderson simply replied "He tasks me, and I shall have him,".

A rousing 3-1 victory on the road, topped by an effort that is increasingly becoming the norm for "Andy". Didn't see the game, caught it on NHL radio (and I'm really liking the interface they employ). I did hear "The Save" late in the third; it brought the Ottawa broadcasters out of their seats. Check the video here, and The Miami Herald's coverage here (and it's George Richards' A-Game on this one):

"In previous seasons, one could have counted on a furious comeback by the home team, bet the farm Ottawa would get two quick goals, send the game into overtime and win it there."

Yes, I would have. Indeed, I pretty well expected it last night. Good effort, good coaching, no letdown. A big moral win, and a gargantuan showstopper by Anderson, earning him Third Star of the Night honors over at Puck Daddy.

A couple of quick notes and links as well:

- Update your favorites list: James Mirtle's blog has moved, evolved, and been reborn as From The Rink (dot com). A must read each day, but you all knew that.