Awesome Picture of the Day

Share All sharing options for: Awesome Picture of the Day 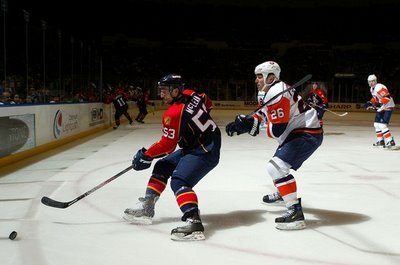 Following yet another power outage during reverse-jersey night at the Nassau Coliseum (est. 1643 AD) FSN's Steve Goldstein, play-by-play man for the Panthers, smartly snags a Maglite from security, shining a brightly-lit LED path from the pressbox for Brett McLean's journey to the cornerboards. Moments later, McLean was wickedly Paul Bunyan-ed from behind. The thirty or so fans in attendance declined to riot, collectively proclaiming there was nothing in the building they wanted.
Reacting to the latest in a seemingly endless line of structural snafus in his club's building, Isles' owner Charles Wang remarked "At least it wasn't another fire,"; team GM Garth Snow immediately promoted captain Bill Guerin to Director of Patron Safety, Head of European Scouting, and Defender of Potentially-leaked Third-Jersey Photos Guy. Watch out, Icethetics!