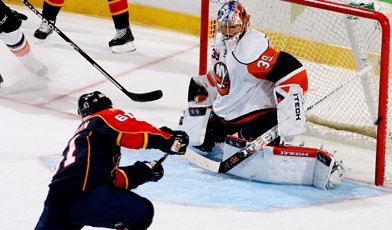 Cory Stillman only has eyes for Ricky D.
A game that featured six Panthers goals, a coming-out party for Anthony Stewart, and Rusty Olesz with an uncharacteristic boarding penalty and game misconduct, came and went in front of 8,800 at the BAC. Next stop: Raleigh.
Looks as if Stewart may have locked up that coveted final roster spot that was all but handed to Shawn Matthias, or to a lesser extent, Michael Frolik, at the start of camp. Outside of JM's office, no one gave Stewart the time of day going into the exhibition season. Including myself. Man, has he picked it up.
A pall over the evening featured Isles' defenseman Chris Lee, after the - unintentional - hit from behind by Olesz. Removed by stretcher, he was expected to have stayed the night under observation.
I can't say enough about Stewart. I love being proven wrong.