Cullimore In, Murphy Out

Share All sharing options for: Cullimore In, Murphy Out 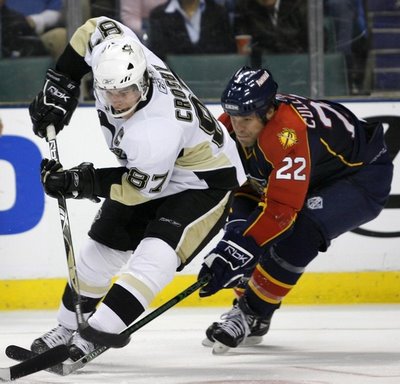 Former Panthers defenseman Jassen Cullimore (shown above right, next to a non-descript Pittsburgh Penguin) has been signed by Florida in an effort to replace some of the troops lost to injury. One of those recently hurt, Cory Murphy, may miss up to a month with a shoulder ailment, though it will not require surgery. Older but undeniably reliable - witness his +21 last year - this move was a no-brainer for JM the GM. Good to see Cully back in the fold.
Photo FYI: Not a good sign when, as in the photo above, Cullimore finds himself behind Sidney what's-his-name.