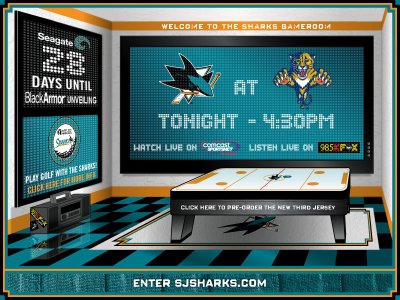 Not a lot of notes circulating the web in regard to tonight's matchup featuring San Jose at the BAC, but here we go:

The Miami Herald profiles the positive situation Cats' goaltending coach Pierre Groulx finds himself in with his soldiers. Also from GR, the head-pounding stat of the day: "Florida hasn't beaten San Jose since Feb. 9, 2000". Geez. I had just days prior turned 29. A lifetime ago and half a world away. Man.

The garden-variety game preview, found on both clubs' home pages, is posted here.

In other news, former Panther and current Leafs' defenseman Mike Van Ryn vaporized into the sideboards at TDBanknorthShawmutFleetGardenCenter powered by WebsterBank. That's in Boston! Milan Lucic - or Cam Neely minus the mounds of scar tissue - was soonafter witnessed running toward the waterfront with a glass-splintered battering ram.