From the Desk of W4E: Panthers - And Fans - Lack Hate for In-state Rival, and Vice-Versa

Share All sharing options for: From the Desk of W4E: Panthers - And Fans - Lack Hate for In-state Rival, and Vice-Versa 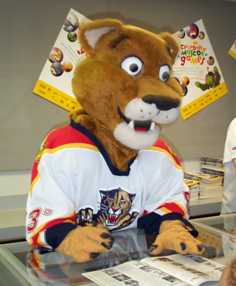 I'd like to welcome BoltsMag to The Litter Box universe. Fresh and consistently updated, a great resource for Lightning - and hockey - fans alike.


Remember, Cat faithful, the same day Wayne Huizenga was awarded his yet-unnamed South Florida franchise, Expo Hall's finest played the Rangers at Miami Arena for one of those regular season neutral-site deals. And lost. Great game, though. Still got the ticket. The sheer thrill at seeing Four-Goal Chris Kontos in person was beyond words. Well, maybe not quite, but kewl nonetheless. And yes, I yelled loudly for the first-year Bolts. Until about three hours after the game, when Huizenga shook hands with newly-installed puppet Gary Bettman.


We're inexorably tied to that franchise to the west. The hatred certainly doesn't begin to approach Flames-Oilers, Isles-Rangers, or Bruins-Habs, but I eagerly await the day that it does.


As a Cat fan, I obviously appreciate the simple fact that we have a local club. Spoiled I was when working a skywalk away from the Hartford Civic Center a billion years ago. How could you NOT go to the game that night?


Going to a match at the mall featuring the mighty-but-under-talented Whale taking on the hated Broons of Bahston was an excercise in frustration, rage, highs, lows, and more frustration. The contests were always close - one-goal differences being the norm - and extraordinarily hard-fought. Fights galore. And those were in the stands. Freaking Epic. Every time. And the Bruins seemed to miraculously win all of 'em, either late in the third or on a power play in overtime (thanks so much, Pat Verbeek. Enjoy all those American dollars rolling in when pimping the workout crap).


One must understand the bad blood between these two franchises; it was deep. True Hatred. B's faithful came out of the woodwork from Springfield, Worcester, Boston. Getting a beer while play continues and a goal is scored? You couldn't tell which team it was. Broons fans overtook the building, rendering goal-horns completely obsolete.


The mere mention of names such as Neely, Juneau, Bourque, Janney (from Enfield, CT), Oates, Ruzicka, Wesley (don't ask), Sweeney, and the rest give me sleepless nights at best. Mad Mike Milbury and little Rick Lee...the coaches...scratching their way over the separation glass to carve each others' eyes out. Fisticuffs in the parking lots. The elevators. At the concession stands. It was not unusual to witness hordes of Bruin "fans" stalking Church, Ann, and Asylum Streets with tire irons after games. Or worse.
(On that note, I'm absolutely dying for the day I witness Pete DeBoer and Barry Melrose attempting to pull a "Temple of Doom"-style heart-out-of-the-chest, old fashioned hockey, get-to-know-ya type of thing.)


But it was glorious. Gladiatorial. Our David fighting their Goliath. In their own backyard. Let's ignore the fact that the Boston Garden was the Whalers' Chamber of Horrors. The Bruins picked up a lot of "W"s in Hartford, but What. A. Ride.


It confuses me that the Panthers and Lightning don't have a more heated rivalry.
Do they play each other too much? Perhaps, but Calgary and Edmonton never appear to lose their enthusiasm for Total Destruction each time they get on the same sheet of ice. And the fans follow suit.
Maybe the markets just don't have their hearts in it? Could be. Tampa might as well be San Diego from where I sit in North Palm Beach. We on the eastern coast of Florida simply don't think about things "over there"; there's enough going on in the tri-county area to keep us busy, what with gangland shootings, gas-price gouging, and dimpled chads. Hartford was always an afterthought to Boston, but the egos and seemingly-superior ambitions of Bruin fans kept us eager for regional domination. "The Battle of New England" was fierce, unending, brutal. They wanted us vanquished, we needed to prove our legitimacy. Never happened. We all lost, eventually. (Ironically, as a psychopath for the Whale, I now get the opportunity to despise the Carolina franchise for real. On the ice. Dive into that.)
The regional aspect appears quite different here, where loyalties are weaker, number-wise. The Lightning began play in 1992. The Panthers first skated in 1993. And this is Florida. I'm not promoting the standard-issue "they've got ice hockey...in Florida???" line, only that we - and that includes both coasts - in fact are a non-traditional couple of markets for the sport. Big news there.
The Broons have been around for 80-something years. That's "established". The Whalers were born in Boston, 1972, played at The Gahden, moved to Springfield, MA, moved to Hartford, moved to Springfield, MA once again following a Hartford Civic Center roof collapse, and moved back to Hartford in 1980. Simply put, the Bruins organization never liked this bunch who was crowding their territory, and made it clear whenever they faced off together. Harry Sinden never napped at the Hartford Sheraton, I assure you.
The Panthers and Lightning need something. I'm not sure what that might be...maybe a crushing open-ice hip-check to send a player to the bench for the season, perhaps a playoff round against each other (not too likely...duh), even something unforseen.
From a personal standpoint, I miss that unspeakable level of anger, hatred, and indefinable chaos that comes with true rivalries. We need that here...in all of Florida. It can happen, but it starts on the ice.
Oh yeah, BoltsMag is a great site. That was the point of this entire rant, right? Check it out.