On Marian Gaborik and Jay Bouwmeester

Share All sharing options for: On Marian Gaborik and Jay Bouwmeester 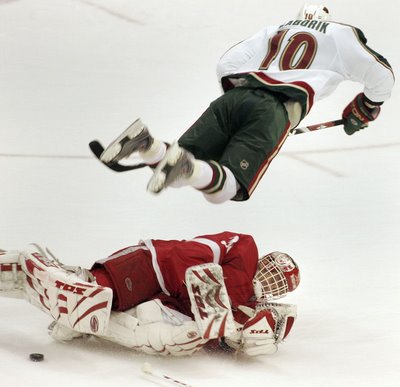 From what we've seen out of Jay Bouwmeester the past two games, I'd be extraordinarily hesitant to do anything other than offer him the bank in January and be done with it. But knowing the realities of the unrestricted free agent battlezone, especially for the cream of the league, here's a prospect I'm sure we've all considered recently, made even more fascinating by who's squaring off this evening in Sunrise:
"The most intriguing possibility (as a destination for Gaborik) might be the Panthers, a team with plenty of cap room next season, pressure to break a long playoff slump this season, and the need for a positive PR move given the likely loss of impending free agent defenseman Jay Bouwmeester. Hmmm...wonder if one team would be willing to swap its problem for the other's?" - Allan Muir, SI.com
First off, both players are likely to receive similar money, IMO. Figure in the $8-9M range by the time the dust has settled.
Gaborik is a tremendous offense player. Witness his numbers: 487GP (all with Minnesota), 207G, 208A, 415P, +51, 57PPP. That's serious stuff, especially on a team playing a system which crushes offensive creativity. He's a franchise cornerstone, big-name forward, with Olli numbers, but generally considered the superior talent that's been shackled by a defense-first organizational mentality. A change will only improve his numbers.
Contrast Gabby's stats with those of Jay Bouwmeester: 391GP (all with Florida), 38G, 124A, 162P, -24. Decent numbers, yes, but no one in hockey will bet against those numbers arcing sharply upward, and soon, if not now. In the past, he had been shackled himself: in a lousy defensive system with very little support. He will thrive in Florida, and could be just as superb, though less offensively, in Minnesota. From a personal view, the guy has simply dominated the past two games. Forget that he averaged 32 minutes TOI in those matches; he was EVERYWHERE. A fourth forward. Like a lightswitch, he appears to have made the leap Just. Like. That.
No matter your opinion on a potential deal such as this, it will always - ALWAYS - be a far more difficult task replacing a great defenseman than a great forward. J-Bo is that great defenseman. We'll never see his like again.