Share All sharing options for: AccuScore Prediction: Panthers(!) 2.6 over Rangers' 2.4 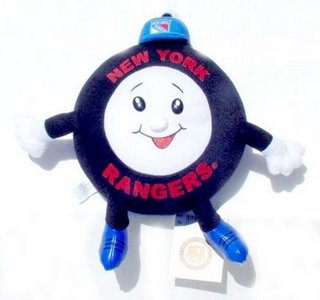 Now I'm worried. Take cover, bring in the kids, lock the doors. Even after the loss of Nathan Horton, the Cats are projected to outscore the Rangahs, according to AccuScore. Must be the addition of center Nick Tarnasky that puts 'em over the top.
By the way, so far, Tarnasky should be playing tonight, and it will be fascinating to see where he's placed. Rumor has it that C Shawn Matthias is going to be called up. Horton is out, as are Richard Zednik and Cory Stillman. Question: Outside of David Booth (11G), does that troika represent all of Florida's hopes?
New York is seeking their third consecutive win, while Florida (4-3-1 in the past eight) looks to, well, get points any way they can. It's that desperate.
One of the finest Rangers-themed sites on the net, Scotty Hockey is the only place to go for coverage of the New York side of the ice.