Bettman: "The league is healthy". Reality: "Not so much".

Share All sharing options for: Bettman: "The league is healthy". Reality: "Not so much". 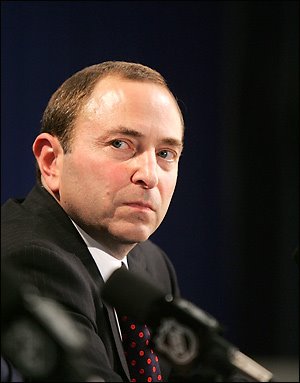 "The dark side of the Commissioner's Office is a pathway to many abilities some consider to be unnatural."


We're not going to delve into the mind-numbing details and theories behind expansion and contraction...again. But a new column by The Globe & Mail's Eric Duhatschek takes a close look at the current health of the league as told from those outside the commissioner's office.

"The Tampa Bay Lightning's new owners reportedly needed help from previous owner, Bill Davidson, to complete their purchase.
The Florida Panthers are papering the house with ticket promotions and giveaways: present a Florida driver's licence, get a free ticket.
The New Jersey Devils moved to a new facility in Newark two years ago, but it has not been a cure-all for their economic struggles either. At the moment, as one of 17 teams experiencing attendance downturns in the first quarter of the season, the club is fighting the city and contractors over who should pay utility bills - and it's hard to make ice without water and electricity.
Against this mounting evidence, amid the worst financial crisis since the Great Depression, commissioner Gary Bettman recently reported a sunny forecast for the gate-driven National Hockey League, buffeted by increased attendance in October and brisk ticket sales in many markets.
Looking forward, the picture isn't so cheery."
A most interesting read, and for us locals it's stunning and rather positive in that the Panthers are not the focus of the piece. Lots of insight on the situation in Phoenix...kinda grim.