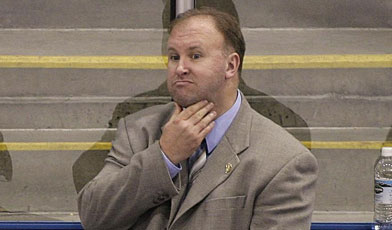 Panthers director of player personnel Jack Birch has stated that Rochester's troubles stem from the players, not their first-year coach, Benoit Groulx (above). Of course, the died-in-the-wool "injury" story inevitably rears its' well-worn head (which proves the Panthers have completely acclimated the Americans into their "system"). From the Rochester Democrat and Chronicle:
"At the same time, injuries to the core of veteran forwards (Janis Sprutks, Karl Stewart and Stefan Meyer) have had a considerable impact. 'I think that has an impact on a young team,' Birch said. 'This record is not a reflection of this coaching staff, that’s for sure,' Birch said."
This should play well up there, with the Cats taking the role of The New Guy, in a town that's had possession of a hockey club for the better part of 53 years.