Share All sharing options for: Game Day! Prepping for our favorite opponent 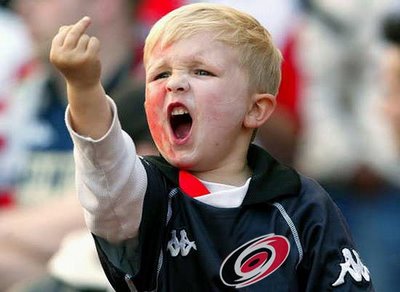 Pipe down, Carolina fans...I haven't trudged out the tired Hartford references, or "Diver Down" flags, nor would I stoop so low as to mention last night's performance at home against Nashville. Need to turn things around for your club? Having a tough stretch? You've come to the right place. I've already bitten off what was left of my fingernails so I won't have to during the third period.
Not really news to anyone, but ex-Cane Cory Stillman remains out for at least another week with concussion stuff. That shouldn't be a problem since the rest of the roster has really picked up their offensive play in his absence. Then again he hadn't scored in six games, so it's a moot point. The evil plan is coming together.
A couple of great Hurricanes'-related sites to check out before the game: CanesCountry and Carolina on Ice.