Share All sharing options for: Game Night! Cats at Broons 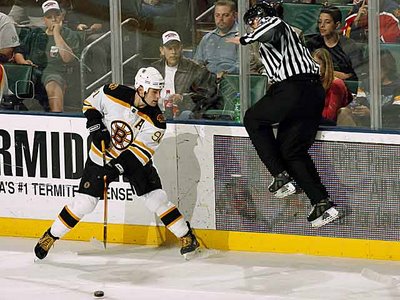 Looks like the early-1990s B's are back. Even officials fear the potential return of Lyn Byers.

And another evening of glorious Panther pucks is upon us. Now that we've had the opportunity to shower off and peel the discontent over last night's travesty out of the pores of our collective skin, the Boston Bruins open the doors of the ____ ______ ______ _____ Garden to Florida.

Been a bit of a struggle finding any pregame notes of interest, and considering the kooky day I'm attempting to put behind me, I defer you to the terrific Bruins resource known as Cornelius Hardenbergh and the Hockey Blog Adventure. I owe Cornelius an apology for not having a link to his awesome site posted up before today, and was honored that he wanted to include a few of my "thoughts from the enemy" in his pregame notes. His collection of links and info on both clubs is first-rate.

As regular readers - yes, the twelve of you - know all too well, I was no fan of the Bruins or their beloved palace (my personal chamber of horrors), the Boston Garden. There was absolutely no love lost between the B's and the Whale. But it's funny how time has lessoned - heck, disintegrated - my disdain for All Things Boston (except the city...always a liquor-saturated blast). I really hated that club with every fiber of my being. Hated their colors. Their fans. Their arrogance. Now? Not so much. I'm actually rather pleased the Bruin Faithful are back on the map. It's good for them, and good for the league. And yes, I've already written Tim Thomas in on the All Star ballot.