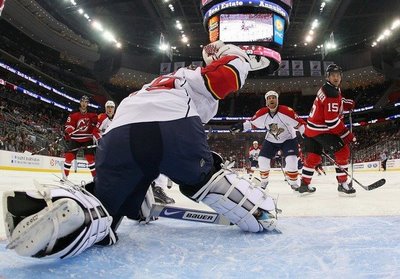 On tap tonight at the BAC: our friends in red from Newark. We can only hope they're still laughing at the outcome of last week's debacle; time to catch someone off guard. Oh, and still no Brodeur. As for tonight's starters, I'm going with Anderson and former Cat Kevin Weekes, though Scott Clemmenson is on a bit of a tear. Pure speculation.

AccuScore has this one razor-tight, but since the Panthers are the Panthers, New Jersey gets the nod. Be nice to see a bit o' bad blood spill over from last week.

UPDATE: Clemmenson starts for the Devils. So much for my speculation.

Following my mature, well-reasoned (!) rant the other night re: FSN/Comcast switching from the Panthers HD pregame broadcast to the Miami Heat HD broadcast, Fox Sports contacted me soon after. Attend:

Hi Don, Thanks for the email. We double checked with our producer and lastnight's Panthers game telecast was indeed offered in HD as you mentioned. Who is your cable or satellite provider? We can follow up with them, or you might want to, to see if there were any technical problems last night but we did not receive other emails so perhaps this was an isolated issue. Below is a link to our website along with a list of all the SouthFlorida cable and satellite systems who are offering FOX SportsFlorida's Panther games in HD. And by the way - approximately half of the Panther and HEAT games are offered in HD - one is not favored over the other.

A list of all of FSN's standard and high-definition channels was included, you know, in case I wasn't familiar, being a fan and all. No other emails were received probably because I was the only Cats' fan in West Palm Beach, which is precisely one more than the Heat have up here. Whatever. At least they bothered enough to send me a "Dear John" letter with my name on it, and appreciate their effort, at least to that extent. I'll never get anywhere with Comcast, so Creek - Paddle = Me. Case closed. Spoiled, I was.

Terrific blogsite covering the Devils: In Lou We Trust, over at Mirtle's SBNation. Don't miss it.