Igor Larionov: First Panther in HOF? Yes. Yes He Is.

Share All sharing options for: Igor Larionov: First Panther in HOF? Yes. Yes He Is. 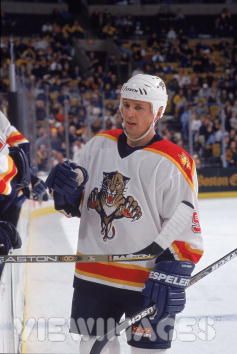 Wonderful find by Richards' On Frozen Pond, and picked up by Mirtle's From The Rink.
It would appear newly-minted Hockey Hall of Famer Igor Larionov is the first person inducted into the Toronto shrine to have played with the Panthers.
For 26 games. Evidently that's not enough for the Cats to tip their hats.
Read on above for GR's slightly sardonic - but historically justified - sense of reality on the situation. Good points, all. And bravo for the "Den of Honor" skewering. I should have said it long ago.
This revelation really came as a shock to me. Guess I simply never thought this over. Think about it: your team never makes the playoffs, who would give the HOF a single thought?
It's terribly obvious now, looking back through the rosters of lousy seasons gone by. Lots and lots of "character" and "role" players, veeeery few stars, much less superstars. Pavel Bure will get his day, but who else may join him? How about just the recent guys? Luongo? Perhaps, but he'd better start racking up playoff wins. Jokinen? See Luongo, and he'll need MVPs to boot. Many. Bouwmeester? There are frightening rumblings he's not now - nor going to be - the player scouts envisioned; and though he remains on the younger end of 24, there's always this type of talk, from SI's Allen Muir:
Sorry, Cats fans. If you were thinking that a Bouwmeester trade would provide both instant and long-term relief for your suffering, you're going to be disappointed.
"There are 29 teams that would love to have Bouwmeester, but his name is more valuable than his game right now" one pro scout told SI.com. "He's a world-class skater and his physical play is improving and he's obviously a workhorse. But I think we've all seen the flaws, too. His passing is nowhere near where it was expected to be. He doesn't always make the best read and he gets nothing on his shot. He's been great in his own zone, but the offensive game isn't there. He's not the player we all thought he'd be. I don't think anyone's going to give away the farm for him."
Guess we'll put off the Hall of Fame talk for now. Congrats to Igor from TLB.