Share All sharing options for: Lightning Bolt Melrose, All Odds On Tocchet 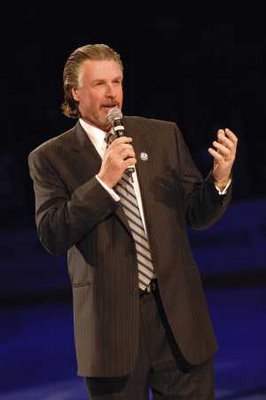 WOW. Just cruisin' the webs, looking for content, and bang: Mirtle drops the big one. Good thing I held on to my ticket from the other night...how many other folks can PROVE they attended the second-to-last game of The Mullett's comeback? The only surprise I see in this move is that it came a bit earlier than I had imagined. This speaks volumes for Tampa Bay's new ownership. Like a severe lack of patience. Melrose didn't assemble this squad, and presumably had no input, guessing from the steadily increasing egos who run their show. Is any one person in charge? Pathetic. This is beginning to parallel Leafs' territory: ownership- or management-by-committee. Who would dare apply for that deal now? I called it a circus in August and stand by it today. Rick Tocchet will apparently be the full-timer in a gig that delivers him his first head-man position. I shall refrain from the obligatory gambling puns.