Only in the NHL: The Shat to "Sing" Anthems in Montreal? Make it So...

Share All sharing options for: Only in the NHL: The Shat to "Sing" Anthems in Montreal? Make it So... 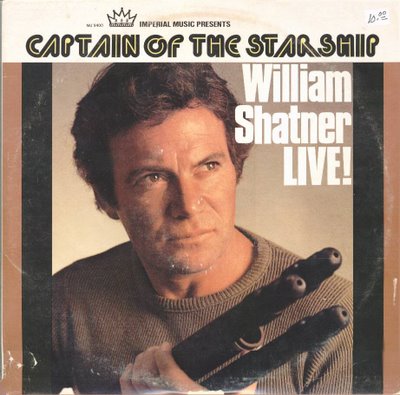 Didn't have this one on the brain when I awoke today: The Montreal Canadiens are being petitioned to allow Kirk himself to pull anthem duty at a game to be determined later this season in "honor" of the Habs' 100th year. To give you an idea of the scope of what is being proposed, the picture above details The Shat's efforts to protect himself from music critics - and the general populace - hurling eggs, tomatoes, and onions his way following his previous album. The sordid "Lucy in the sky with Diamonds" affair is well chronicled around the web. Google it...you won't be sorry. Actually, you will. Much like the Star Wars Holiday Special.
Exercise your rights. If you sign only a single petition this decade, MAKE THIS THE ONE.
Greg at Puck Daddy and the bunch at Four Habs Fans sum it all up admirably.
For the record, I'm counting the hours until the new film opens. Once a Trekkie, always a Trekkie.