Pappa Bouwmeester: "I know what's going to happen...but I can't be open about it"

Share All sharing options for: Pappa Bouwmeester: "I know what's going to happen...but I can't be open about it" 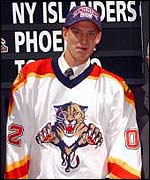 Like that? Or how about this bit of lovin':
It's evident that he's been frustrated not only by the way the Panthers have handled his son but by the very existence of a hockey team in a region that doesn't appreciate it.
"It shouldn't even be in the NHL," he says. "It's not a hockey town. Why is it even down there?"
I'll be the first to admit, I've never before heard of the Broward-Palm Beach New Times. Its' sports section is now in my favorites. Writer Thomas Francis hits one over the wall with his story on the number one target of the trade deadline late next winter. Get yourself a strong cocktail, take the phone off its hook and get into this. Now.
Kinda defines what the next few months hold, eh? Gonna scrape the lint off your J-Bo sweater with a bit more alacrity now?
My take is this: Jay's agent had dear old Dad fire the shots heard 'round Sunrise, if only to get the faithful, and JM the GM, acclimated and allow the ball to roll. Whatever. He's a goner.
And thanks for your support of the South Florida hockey market, Dad. Way to go cementing your son's reputation.