Say it ain't so: a real-live Panthers' "goalie controversy"?

Share All sharing options for: Say it ain't so: a real-live Panthers' "goalie controversy"? 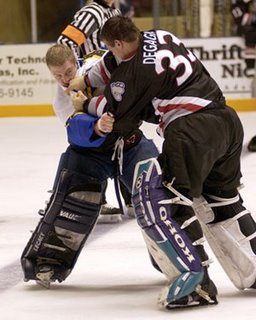 Several hours from now the Cats will take on the Rangers at MSG during the backend of a home-and-home, and presumably we still don't know who will get the start in net. During the best of circumstances this is not necessarily a bad thing; having a stable of two guys who have hit their stride at the same moment can be a blessing, if only they can keep their egos in check. In Florida's case, the long-anointed number 1 - and monster-contract-holder, Tomas Vokoun, has yet to display his true talents this season. It took a while last year as well, but the period of adjustment to a new club, coaches, systems, and defenses is far in the past. "Backup" Craig Anderson appears to be the go-to netminder, and considering his penchance for pulling out miracles following a softie or two (he finished with over 40 saves Friday), who wouldn't play him right now? This is a difficult position for Coach Pete: Vokoun is an extraordinarily expensive benchwarmer (can't be making management too happy), not to mention Anderson is in a contract year and likely playing the best hockey we're going to see out of him. Both are gamers and leaders for their club. The underlying problem really is Vokoun. He must work out of his funk. Or the skaters must work out of their collective funk playing in front of him. Don't know which it is, but it is certainly one of the two. Either way, this is a coaching dilemma.