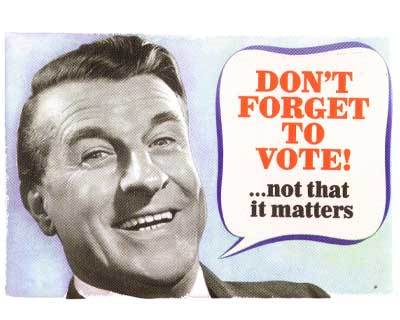 The league has chosen to "honor" Tomas Vokoun (4-10-0-1, 3.02, .912) and Jay Bouwmeester (0G-8A-8P, -7) with spots on the 2009 All Star Game ballot. Shiny numbers and all, but I'm thinking we fans can do a better job. Now, it's sweet and cuddly that every club, no matter how pathetic, gets represented in the "game"; guess it's all part of Gary Bettman's outreach program. That being said, how about some realism? Some folks who've been there, night after miserable night, giving their all regardless of the apocalyptic situation? (For the record, Vokoun's a gamer, and his record is not entirely his fault, but he hasn't been the "rock" that his resume demands. And Bouwmeester's been walkin' the green mile since the second week of the season.)

So in the spirit of inclusion and diversity (and boy, am I tired of those words) we hereby submit for your approval the following three player as write-ins on the NHL's official ballot. And by the way: VOTE. A. LOT. Or not. Up to you.

Forward: David Booth (19GP-9G-1A-10P, even). Horton's got more points (12) but he's a minus-5. Cory Stillman might've snuck in here if not for the involuntary facial-reconstruction he received a couiple of weeks ago. Booth has been everything to this club up front, and a ball of energy that has no equal.

Defense: Keith Ballard (19GP-2G-10A-12P, -1). All we could have hoped for defensively in the Jokinen deal, Ballard's been nothing short of the torch carrier on the backend (wasn't that job already spoken for? Meh). Speed, skill, a thundering checker. You don't pick these types up every day. Alternate: Bryan McCabe.

Goal: Craig Anderson (3-1-1-1, 2.08, .940). He's given up a couple of stinkers, but not many. And none of those three losses were his doing...especially being left for dead as his blueliners so often do. He probably won't qualify anyway based on games-played, but this one sure would be the cat's ass, to coin a phrase. No matter how painful the inquisition-on-ice may be, he's always got a smile, and he never ever quits. Gets puck bunny points, as well. Alternate: um, Craig Anderson.

So there you go, South Florida and the Outer Rim Systems. If we've gotta have a Panther in that most meaningless of games, let's make it the right one. GET OUT AND VOTE!