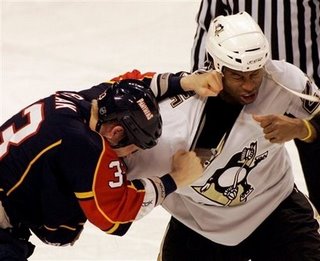 This one came out of nowhere. As reported by George Richards, forward/defenseman/pugilist Wade Belak has been placed on waivers by Uncle Jacques, with no official explanation.
Whether one agrees or not, Coach Pete obviously has seen very little use for the big guy, allowing the likes of Nick Boynton to grab the title of Chief Enforcer (and I very much do not agree with that).
Whatever your opinion of the man may be - and I can't see anything but positives - he plays forward and defense. On a club so desperately hurting for healthy bodies/happy bodies, is this the player you make an example out of? One who was thrilled to be here? Who just signed a two-year contract? What the devil is going on?
Is JM clearing roster/cap space for a future deal? I could think of several others to be dangling on the waiver wire before Wade. But if the coach won't play him...
Get over to On Frozen Pond for Belak's fascinating - and completely supportable - opinions.