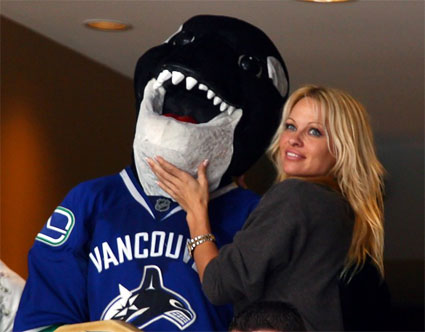 Given Pam's love for aquatic mammals, where was she during Hartford's run?

Coming off three straight road victories, Stephen Weiss the Cats travel to Vancouver for the final match of their western trip. The Canucks were shut out last night by Edmonton, 3-0. Roberto Luongo remains out with a groin injury. Cory Stillman is - finally - probable for tonight's game. Craig Anderson returns as Cory Schneider is expected to start for the home squad. The Panthers haven't won in Vancouver since their inagural season of 1993-94. Fourteen years. Sick.

Washington extended their lead in the Southeast, defeating Montreal 2-1, while Carolina fell in OT to the Rangers, picking up a valuable point. Doormats Tampa Bay and Atlanta both lost in regulation.