Who's yer Daddy? He's at Yahoo! Sports...and he needs your help

Share All sharing options for: Who's yer Daddy? He's at Yahoo! Sports...and he needs your help

I humbly ask that we all get out the vote for the gang at Yahoo!'s Puck Daddy.

Greg, Sean, Ross, and Matt have been nominated in Busted Coverage's Sports Blogger of the Year tourney. Get over there and help a few hard-on-their-luck guys out.

Somehow or other, our buddy James Mirtle's From the Rink didn't make this one, but he was up for Canadian Sports Blogger of the Year. Again. And finished second (up from third). So that's something.

These folks have all been most kind to The Box since its' inception, and the least we can do for them is display for all the world what we're made of.

So once more, please show 'em some love from The Litter Box. They've entertained and enlightened us each and every day since like July. 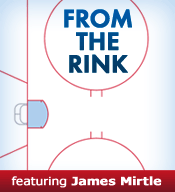 Thanks to Travis of Broad And Pattison, Mirtle's From the Rink has indeed been nominated, only that the seeding has him placed in the mid-West. For a blog out of Toronto, Ontario this makes perfect sense.

So go vote for him too!

From the Rink has pulled even, and Puck Daddy has jumped ahead significantly! Don't let up!