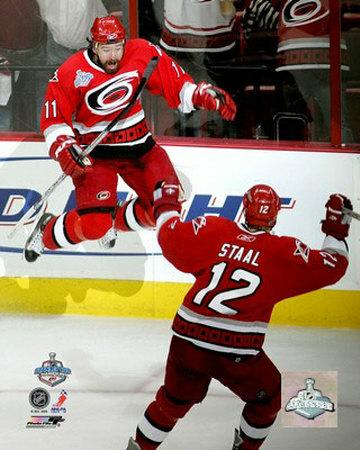 Another day of practice for Carolina. Here we see a demonstration of how to react when grazed by a stick, aka "The Laviolette".

Our dear compadres from the Triangle welcome the Panthers to town, in what is always a classic and entertaining matchup, if you don't count the final score. Blown leads and questionable calls abound, and please take notice I have not yet utilized the word "dive" in any fashion. We're all about objectivity here at The Box.

Long-time Pete DeBoer buddy Paul Maurice returns to Florida for the first time since being re-hired by the Hartfo Carolina organization, in his second stint as head coach. Confused? Not like I was when he got picked up again.

The Panthers are coming off a 5-3 loss in Vancouver on Sunday, ending a club-record 5-game road winning streak. The Hurricanes won 3-2 Tuesday in Raleigh, beating the Canadiens.

One look at the two clubs' current placement tells the tale: 2 point difference: A Florida win ties the two with one game in hand for the Cats, while a regulation loss essentially erases that advantage, leaving a four-point hole to climb out of. Neither team is in danger of being overtaken by Tampa Bay or Atlanta this week. Or month. Florida is the only club in the Southeast with five wins in the division.

Tomas Vokoun will be in net for the Cats, while Cam Ward is expected to go for the Hurricanes, though could be supplanted by Michael Leighton. My money's on Ward.

T-Vo is 7-6-1-2 all-time in 17 games (all starts) against Carolina with no SO. He won his last game against them. Ward is 6-2-0-0 lifetime against Florida with no SO; winning his last start opposite the Cats. Leighton is 0-1-1-0 lifetime, losing his prior start in regulation.

Weiss is 50/50 for a return tonight, though Ballard will reportedly be in the lineup. Not that it makes a difference (cue sarcasm-o-meter) but Nathan Horton, David Booth, and Richard Zednik are all expected to make their post-partum debuts tonight. Cory Stillman returned Sunday.

Kaberle was taken off the IR yesterday, and presumably will be playing, since Tim Conboy was reassigned.

Of interest to the Cats (and the Hurricanes, BTW):