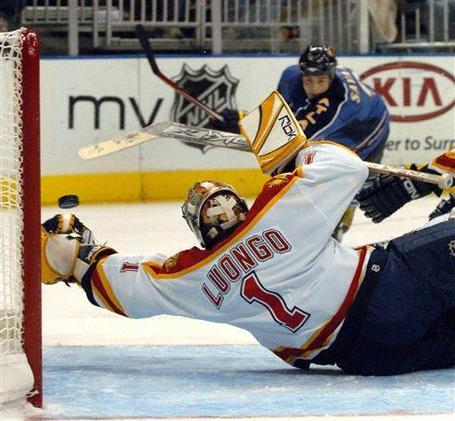 This guy had absolutely nothing to do with the outcome in D.C., but Andy's recent play in the crease has fans - and his coaches - believing.

The Cats gave their faithful a bit of a scare late, but held on for a win on road ice against a scrambling Washington squad.

Florida goaltender Craig Anderson, an absolute beast recently, backstopped the Panthers - a team increasingly under his ownership - to a 5-3 victory, and bolstered by the offensive efforts of Ville Peltonen and Radek Dvorak, with 1 goal, 1 assist apiece.

Capitals coach Bruce Boudreau: "Anybody can make it close and play hard for seven minutes and say, 'Wow, we were close,' But it wasn't a close game. They were dominating us to the point where you're undefeated at home and you're getting booed - which probably was rightfully deserved..."

Andy? Yet another win. Coach DeBoer? Turning the corner perhaps. Now I'm nervous about the impending return of the likes of Stillman, Horton, etc. Can it be that chemistry has finally worked it's way into the lineup? Do the Cats now have the most expensive backup goaltender in North America?

(The Sun-Sentinel copped out with an AP article, while the Washington Post requires registration. And I didn't feel like registramating this early in the day. Maybe later. After coffee.)

Scraped from the Box

Alex Ovechkin had one assist. Andy's (26 shots/23 saves) been named starter tomorrow at home vs. Buffalo; he is 5-1-3 this year. Florida had two PP goals.