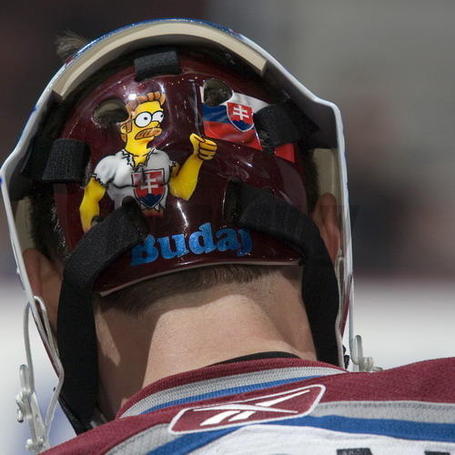 Avs at Cats, 5pm, FSN-FL (no HD. So blasphemously jonesed.)

One can safely conclude that the "rivalry" between Florida and Colorado - based solely on one playoff appearance matchup 12 years ago - never was more than bluster. So get that out of your head before expecting Bruins/Habs-style hatred. Even Sakic's out of this one. 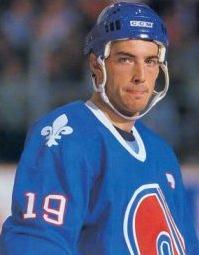 And that is a shame. Joe Sakic is worth the price of admission alone, if only to see a soon-to-be Hall of Famer in action. Wanna age me? I watched him as a Nord. A rookie Nord. Speaking of that, if Quebec City were to get another NHL team, would headlines across North America inevitably read "Revenge of the Nords"? Killin' myself here.

Oh well. When you're so committed to being the best in your sport, little time is left over for garnering any useful skills in the operation of large power tools. Looks like three months for the guy. Tragic, if his career end with a thud of this type. But fear not: Peter Budaj's in town! Paul Stastny is bursting with talent. Can't think of anything else for the guy cuz he's out west and his entire family played for Quebec at one point or another. Which is kewl. 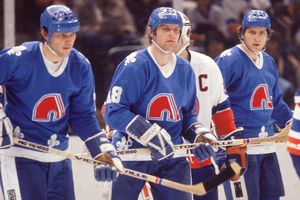 Karlis Skrastins sees his former club for the first time since his acquisition by Florida last year, while Ruslan Salei is doubtful for tonight, spoiling his return to Sunrise.

As for the Cats, "Hot" defines soon-to-be-ex-Panther Jay Bouwmeester, who has goals in four of the last eight games, and of the last three matches he has two markers (cue league-wide spotlight). For the Avs, Paul Stastny attempts to stretch his goal-scoring streak to four games.

Check in around 5ish for the obligatory Open Thread!

Cullimore should be ready to rock.

Svatos is skating and may be inserted into the lineup come gametime.

Everyone but Florida played yesterday, and the results were pleasing: the Thrashers downed the visiting Bolts in regulation, as did Boston over Carolina at the TD BankNorthBailoutShawmutFleetCenter Garden on Causeway. The Caps, meanwhile, were slapped into submission by host Philadelphia, 7-1.

Today the Hurricanes travel to Montreal in a matchup of clubs playing the rear end of back-to-backs. The Habs defeated Buffalo 4-3 in OT Saturday.

Florida can close to within 9 points of idle Washington with a victory; two games in hand on the Caps remain. A Panther win and Carolina regulation loss would put the Cats one point back of second place; as well, Florida has two games in hand over the Hurricanes.

And if you're going to the game, email me some photos and I'll post 'em up: pantherslitterbox@yahoo.com.