Cats hang on for home win against Sabres 2-1

Share All sharing options for: Cats hang on for home win against Sabres 2-1 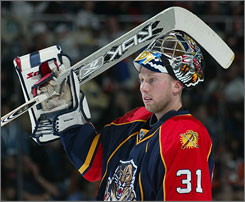 The most important man in the world.

This was an energetic game on both sides, as through most of the contest no one had a clear edge. As the cliche states: It came down to goaltending.

The Peltonen-Campbell-Dvorak trio appeared to be on the ice any and all times an offensive push was made. They've got a few good great games behind them as a unit, and it's terrific to see them - heck, the entire bandaged team - playing as a cohesive whole.

Buffalo had planty of opportunities - witness the shot total - but were unable to cash in until a we-have-to-even-it-up debatable interference call in the third, allowing the visitors a 5 on 3 in which they quickly capitalized. Changed the score, but not the outcome. Hard-fought until a Panthers' "we-owe-'em" call late in the third allowed for a defensive press, paving the way for the victory. Lost some nails, I did, but a positive finish nonetheless. And how about that Campbell goal?

Sabres' goaltender Ryan Miller was brilliant at times, except when he really had to be. Two goals in the second - 35 seconds apart - seals that fate. Choke. Well, not a choke, but a case of hard work by the Cats paying off. How many times has a Florida goalie suffered the same fate as Miller?

Soooo...what happens with the impending arrival of Booth? Horton? Zeds? Stillman? That's where the coaching genius will be made apparent - or lacking. Throw these boys back into the mix and who knows what the Osterizer will produce.

Many thanks to SB Nation's Die by the Blade for hosting a terrific Open Thread. Highly recommended.

Next up: Da Broons in Sunrise Saturday night.