What's on your plate?

Share All sharing options for: What's on your plate?

2,876. That's the number of Florida Panthers' vanity tags sold by the state DMV in 2008. Not too bad for a club that hasn't tasted a playoff game since the Clinton administration.

There's another cat on the block, however, who's not concerned about hockey, has never seen a minute of postseason action, and sold 80,065 plates last year: the Florida panther.

Couldn't they jam a broken stick into it's mouth and call it a joint-mission between the boys from Sunrise and animal-lovers around the state? Suddenly we're in the bigs, right behind some cartoon reptile from Gainesville.

I'm all for the protection of this beautiful and endangered creature, but did the creation of the hockey team not draw needed positive attention to their dire situation? After all, they just want to be able to cross the road with dignity like the rest of us.

To this day I'm still asked if there truly is a Florida panther (only a little less often than if I can see the "H" in the Whalers' logo). I guess most folks simply figure all panthers live in jungles rain forests. Yes, Virginia. There IS a Florida Ppanther. And it lives in a swamp.

Anyway, just having fun with numbers provided by the Tampa Tribune. BTW: the panther tag (the animal, not Nick Tarnasky's team) ranks third overall out of 110 total vanity plates. The Panthers (Tarnasky's team, not the animal) were 67th. Room to expand.

As for the Lightning, our cross-state "rival", the 2004 Stanley Cup celebration continues in full swing despite deplorable numbers in the league standings. Nonetheless, DMV stats indicate 5,397 Bolt tags were issued last year, earning them the rank of 60. Question: has the state updated the logo/wordmark to the Lightning's awful fresh new look?

Not a big deal. It could always be worse: 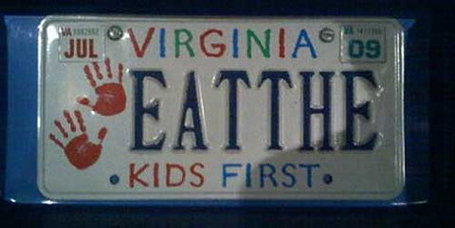