Share All sharing options for: Let the beatings begin: Bouwmeester for Lecavalier? 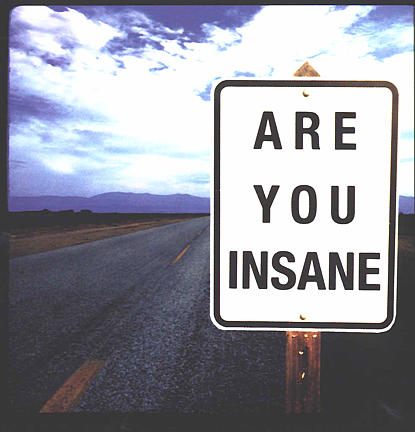 The good Lord knows I'm not a fan of intra-division deals (see Boyle, Daniel) but yours truly has been mulling over this crazed and hysterical hypothetical for a few hours now, in light of all the "Vinny to _____" talk over the past few days. Heck, months.

Perhaps it's the Merlot. Kidding...we at The Box have moved on to Burgundy. It's all about manliness here in the Southeast.

Stay with me for a moment on this...

Tampa Bay needs: a defenseman. Well, a lot of defensemen, but first and foremost a gamebreaking, ultra-reliable, puck-moving, relatively young defenseman whom a team can be built around. Steve Eminger? Andrej Meszaros? How about Paul Ranger? All decent second- and third-liners. Would a sane GM (or even Lightning management) construct several years of draft picks and trades around the strengths and weaknesses of these guys? Stopgap at best, and evidently defense just isn't hasn't been that important to the fantasy league managers in Hockey Bay. There's nothing in the minors for them to tap into, certainly no above-grade talent of note. 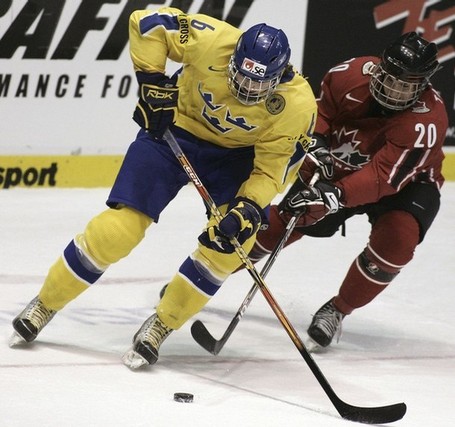 "Silence of the Lambs" jokes aside, Sweden's Victor Hedman (left) fights for posession of the puck with Canada's John Tavares at the recent World Junior Championships.

Even if Tampa Bay "crashes" and winds up with the first- or second-overall pick in June, they're getting uber-highly-regarded forward John Tavares, who, recent overhyped draft picks aside, will probably slot right into the starting lineup, or D-man Victor Hedman, who as a defenseman will take several seasons to claim his potential spot as the club's number one defender. Granted, if Hedman's as good as advertised, he'll be a no-bull guy to build around. But the time required to blossom is not within the framework or pattern the Lightning's ownership has displayed to this point. They want offense, pure and simple. If I'm a betting man, I say the team goes all-out for Tavares. Damn the defense: full speed ahead. The by-product? Bolts defenders continue giving up a relatively high number of shots for years to come. Either way, with apologies to Mike Smith, they're gonna be scored on a lot.

Florida needs: the stereotypical "bona fide" number one center. Since the loss of Olli Jokinen (whose attributes, be they positive or otherwise, we'll not discuss here), the Panthers have struggled mightily to fill the role of first-line center. Stephen Weiss is finally(?) fulfilling, to an extent, the projections many had for him when he was taken in the first round. And he's not even working the first line, whomever that might be composed of this week. After Weiss? Four-year snoozing winger Nathan Horton has been given a shot at his original natural position, but until very recently, there's been little to write about on a positive note (read: go back to the wing the moment a true center emerges). Michael Frolik? With 17 points in his last 20 games he's been on fire, but a good portion of that time's been spent as a winger. Greg Campbell? The league's number three star of the week is making a strong case for moving up a few lines, but his success has been playing with the likes of Radek Dvorak and Ville Peltonen, hardly first-liners no matter the streaks they may be on. Soup is playing out his role to perfection on an underrated third unit. You don't break that up. Brett McLean? Um, have I mentioned Horton? Shawn Matthias, despite all of the trumpeting I personally gave the kid in camp, just hasn't sealed up his place in the universe yet. All things considered, Florida is seriously lacking (and will continue to be) in this one area, and the past few weeks of success have truly been a team effort, but so much more territory can be conquered with a real number-one dude, for the present and future. 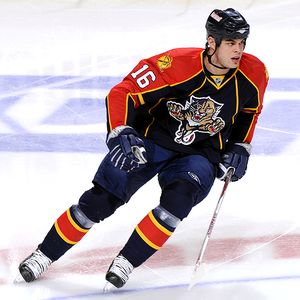 Is Nate the Center of the Future for Florida? So far: meh.

Come draft time, the Cats will be picking - most likely - tenth or worse, so the cream of this year's crop will be long gone. Guys like David Booth, Cory Stillman, and Horton need that larger-than-life setup man. And he won't be plucked from incoming talent, not enough to step right in, in any case. Where oh where might they find one?

That's all great, but what in Heaven's name is W4E talking about? In a simplistic nutshell: Lecavalier for Bouwmeester.

Now that the uncontrollable laughter and spittle has subsided, well ok...do it again, wipe once more...it appears that both of Florida's teams have what the other needs.  Tampa's got the all-world centerman the Panthers have needed (for a lot longer than most observers would imagine), while the Cats currently (and only for a limited time) hold the rights to unquestionably the NHL's Next Great Defenseman.

I'm no capologist, and given J-Bo's (presumed, based upon his father's comments) desire to play in a "real" hockey market, this is by no means an easy feat.

However, I do know this: Vinny likes Florida. He's got a lot invested in the (southwestern) region, between charities and his own desire to remain in a town he calls home. He has repeatedly stated his desire to remain in the area. Tampa is a 25-minute Cessna Citation ride from Fort Lauderdale, door to door. He wouldn't really be leaving anything but the club - and fanbase - that drafted, nurtured, made him rich, and signed him to an eleven-year contract. That's 2020, kids. Or as most people in professional sports would summarize: lifetime. Quite the commitment. With a Stanley Cup ring and league MVP to his resume, the guy has seen it all, from the sewers of also-ran status to pinnacle of the sporting world.

Bouwmeester has very few ties to the southeastern portion of the state, beyond the organization that has fed him from day one back in 2002. It's easy to imagine him as simply another "bright lights, big city" Luongo-type, just waiting for a chilly, hockey-mad metropolitan area to anoint him as the savior and own the place for a decade. The truth is that he couldn't be further from that. He's quiet, soft-spoken, and humble to a fault. He may wear the "A" occasionally but if it were to escape those vaunted dressing room doors that he somehow trashed the place following a poor period, we'd all be stupified. The team is winning - with his offensive help - and he continues to defer to others as the catalyst for team success. Yet apparently, he wants more; he'll get the $7.5M balloons, it's just a matter of where. I'm not convinced his destination must be Toronto, or Montreal, or New York (the western end). Tampa Bay most likely is far more appealing than his hometown of Edmonton (with all due respect to Oiler fans: you know the score).

I'll leave it to others to figure out the logistics of such a deal. Sign-for-eight-years-and-trade Jay, Matthias, and a first-rounder for Lecavalier. Or two first-rounders. Whatever. No matter how it goes down, this is win-win for both clubs.

The PR on each end of the state would be tremendous. We know about Vinny, they know of J-Bo's heroics. Tampa's already in a downward spiral of declining ticket sales and apathy attributed to management. Call the deal a "tent-pole" rebuild, with the first, most important piece in place for the future. Florida? Suddenly, Keith Ballard and Bryan McCabe just became a lot more popular among the coaching staff, but selling the game in Sunrise with a former league MVP immediately became a lot easier.

And wouldn't those Wednesday night Lightning-Panthers games get a little more interesting? The word "rival" begins to equal it's definition.