Cats down Bolts 4-3...in regulation

Share All sharing options for: Cats down Bolts 4-3...in regulation 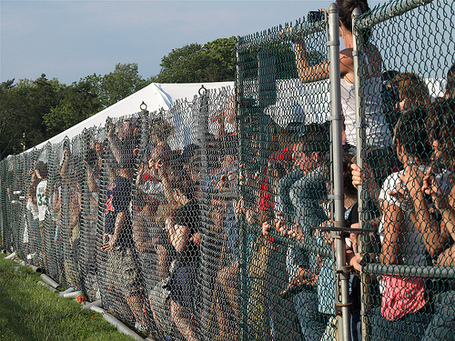 A crazy evening ended on a positive note for the Florida Panthers. If you thought the Lightning's Martin St. Louis was either gruff or golden in calling out his teammates' resolve a few weeks ago, just wait until tomorrow's papers hit the stands.

End of one, Tampa Bay up 3-1 (and the Cats looked defeated with a capital "D"). The Bolts were a collective ball of energy, almost literally running circles around the opposition. The Panthers were back on their heels (remember that line?) and the shellacking continued, even after a Campbell goal to cut the Lightning lead by half. Wasn't much to cheer for from the eastern coast of the Sunshine State. Anderson out, Vokoun in. 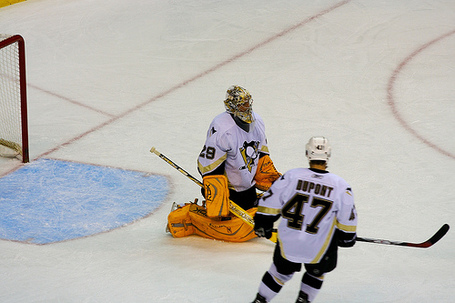 Whoops. Meant to display a goaltender victimized by someone other than himself.

End of two, Florida leads 4-3. A dramatic 180 degree turnaround, capped off by a Jay Bouwmeester (who?) goal with exactly one second remaining in the period. This frame renewed belief in the Panthers' ability to play through adversity, intensified by an Evgeny Artyukhin intent-to-kill action on Ville Peltonen's leg. Already playing on a broken foot, the Cats' hottest forward was swept knee-to-knee, Samuelsson-on-Neely style, near the end of the period. A two-minute minor(!) was assessed, leading to the soon-to-be-legend Bouwmeester's eventual game winner with a blink of an eye remaining. You'll see the hit replayed endlessly over the weekend. The media likes a good, juicy victim...Ville should fill their role perfectly, given the bum foot.

Overheard in the editing room at ESPN:

"Another unfortunate and unwarranted violent act in the NHL tonight, this time from Southwestern Florida, as the Tampa Bay Lightning - hey, wait...is this right, Mike? 'Lightning'? But it's singular! That was a big no-no at Columbia. And 'Panthers'? Like Carolina? Or Pittsburgh? Yeah, that's it. Oh I see...yeah, yeah...hockey. Just hang on, folks: almost back to college beach coed one-armed volleyball. Nineteen, eighteen, seventeen..."

No matter the spin, Pelts was physically destroyed by the blatantly-illegal contact. He left the ice with human crutches and would not return. If his leg is anything more than cottage cheese right now, I'd be shocked. Here's the aftermath of the carnage (evidently, the adrenaline was running rather freely, considering the trauma received):

Obviously, the Florida winger is not himself. We at The Box wish him a speedy return, with a shipment of greeting cards, fresh fauna, and cigarettes already on the way to his padded luxuriously-appointed room.

End of three, Amazingly, no retribution was taken on the home club. However, the visitors sensed a diminishing tide and rode it. Vengeance will come later. The Panthers claimed the victory, after a furiously brutal charge by the Bolts in the final two minutes. It wasn't pretty, but the Cats pulled it out against tough odds. Tampa really was on their game a good portion of the night. They just picked the wrong portions.

That's not entirely fair: the Cats played extraordinarily aggressive hockey throughout the second and third, clearly earning the come-from-behind win. The bounces eventually went the way of the Panthers, and as everyone knows, good teams make the bounces go their way. And so it was. 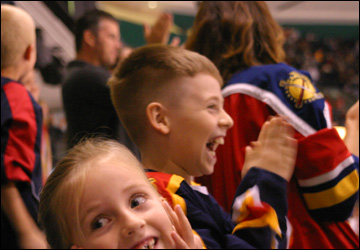 A huge effort by Coach Pete and his boys made for a glorious Saturday evening. Big thanks to DolPhanDave for his updates from the Expo Hall, Suncoast Dome, Thunderdome, Ice Palace, St. Pete Times Forum. And a shoutout to mjdivo at the same location, as well as the Panthers Booster Club members who made the trip and carried the torch for all of us. My hat is off to you.

One note: Craig Anderson alone did not "lose" the first period. He had some rust, yes, but the team in front of him was flat and needed a shakeup. DeBoer's move worked to perfection. Andy will be fine (but as a Ford guy, I'm taking issue with that arguably sweet mask..). No love for the 1987 2.3L Mustang? In "Ford Racing Beige"? Blasphemy. 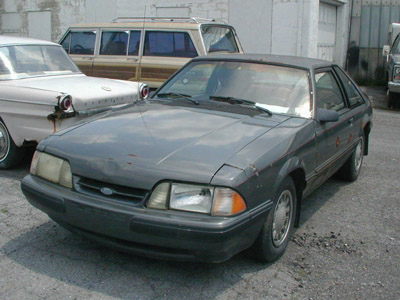 Mine was "Ford Racing Beige". And a coupe. Additionally, self-"installed" K-Mart amber fog lamps led the way during inclement weather, which was non-existent, but truthfully did nothing more than announce to annoyed blinded gun-toting oncoming traffic that a potential trainwreck hot car was approaching. Only I knew different.

TLB STARS OF THE NIGHT

Eerily, I glanced at the "Group of Three", or I guess, G-3, above, and realized we're supposed to be seeing this after every game, in various compositions. J-Bo's a lock, T-Vo's been on the far better part of good lately, and Nathan's been...there. Just when it appears he's crossed that chasm, the guy reverts to a lost fifth-rounder in a Blue Jackets sweater. Amazing.

Mr. Horton, we at The Box implore you: Be what you are meant to be. If you are supposed to suck at a high level for big dollars, then keep it up. We're used to this.

If you are otherwise anointed to be the savior of this franchise, do it. The hockey universe knows it's within you physically. Mentally? Not so much. It's been a tough ride since you came on board. No one will dispute that. All those coaches and general managers with singularly crazy ideas for the "future". It's too much for anyone of any age to have to adapt. BUT...this team is now yours for the taking. It's improving in stature: on the ice, and off. Might not be a bad time to connect yourself to it beyond cable-TV public service announcements.

Be that as it may, word's getting around about your apparent lack of engagement during games. I speak for many fans when I state that your numbers are tremendous, given the remarkably low effort we observers feel you have put into them.

During tonight's game in Tampa Bay, there were three instances which, given the luxury of instant replay (presumably) you - and any other offensive-minded forward - would have shot the puck instead of passed or tried to make the "pretty play": a very hard to define but intensely real malady. Got to admit, Nate...there was a tinge of "dogging it" involved here, at least from this old guy's view. If you want a ticket out, I'm certain there are many clubs who would oblige, but the warning is clear: go to a Toronto or Montreal and see what happens to your self-confidence. It'll be quick.

(I was going to write "What's left of angry fans" but decided that is a disservice to the good folks that have come out to Sunrise - and Miami before it - and gave their cash and faith to see an unlikely hockey club succeed. I joke about the "Illustrious Twelve" fans, but the thousands out there get the joke. It's a badge of courage - and honor - to be a Panthers fan. We know we're never going to be Montreal or Toronto or, well, Toronto...but we can boast that status at least twice per season in Sunrise.)

The preeminent issue here is that the Florida Panthers possess a phenomenal talent in Horton; one capable of scoring insane goals, breaking up opposition plays through telepathy, and supplying the mythical speed of Greek "gods" to overrun the opposition. It's all there, if he chooses that path. End of rant.

In summation: Awesome night by the Cats; a few more believers, as well as the faithful, have been acclimated. Well done, Pete.